The Estrella Warbirds Museum is dedicated to the restoration and preservation of military aircraft, military vehicles, and memorabilia to those who flew and worked on military aircraft. Adopting a name to memorialize the World War II Estrella Army Air Force Base, that which is now Paso Robles Municipal Airport, the Museum was chartered as a not-for-profit California corporation in 1992, and 501(c)3 accreditation soon followed to establish them as an organization approved to receive surplus aircraft and other government properties.

The Paso Robles History Museum and the El Paso de Robles Area Historical Society reside in the historic Carnegie Library in the downtown City Park. The History Museum features exhibits that celebrate our  area’s unique history and will contribute to your overall understanding and experience of Paso. Docents are available to answer questions and share their knowledge of the area. The Historical Society’s research room  is filled with maps, newspapers, photographs & family histories. The Paso Robles History Museum is a must see for visitors and locals alike and is a great way to spend time with family & friends! For information on hours, exhibits, and how to  support our non-profit visit www.pasorobleshistorymuseum.org. 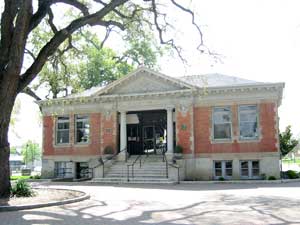